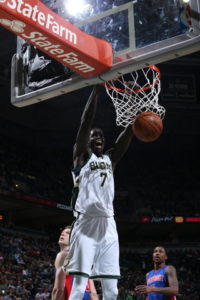 With Malcolm Brogdon sidelined with back tightness, fellow rookie Thon Maker turned in a clutch performance in his absence.  Maker scored a career high 23 points to help the Milwaukee Bucks knock off the Detroit Pistons 108-105 in overtime at the BMO Harris Bradley Center.

The victory, before a sellout crowd, was the Bucks third straight and moved them into fifth place in the Eastern Conference standings.

Maker scored five of his 23 points in overtime, but his key contribution came after Khris Middleton missed a three pointer.  Maker was able to tap the ball back out to Middleton, who hit a three point basket and the Bucks were on their way to victory.

Antetokounmpo finished with 28 points, 14 rebounds and nine assists and Middleton added 25 points and 10 rebounds as the Bucks won for the 13th time in the last 16 games and finished the month of March with a 14-4 record.

The Bucks return to action Sunday afternoon against the Dallas Mavericks at the Bradley Center.