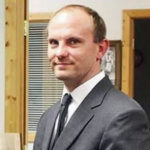 A man accused of shooting and killing a Rusk County Sheriff’s deputy has been found competent to stand trial. In a full Rusk County Courtroom Tuesday,  44 year-old Doug Nitek told Judge Steve Anderson that he was competent.

Neither the prosecutor or defense attorney objected to psychologist reports, so the judge ruled Nitek is competent.

Nitek faces a charge of first-degree intentional homicide and more than two dozen other charges in the death 33 year-old Deputy Dan Glaze on October 29th of last year. Investigators said Glaze was responding to a call about a suspicious vehicle in a field south of Ladysmith when he was shot in his squad car.

Defense Attorney Charles Glynn, asked if the judge was going to recuse himself, because Anderson has prosecuted Nitek in the past. Judge Anderson said he was not going to step aside because Nitek’s case is not unlike any other case in Rusk County, and he is the only judge.

A date has not been set for Nitek’s next court appearance.