You are here: Home / Packers / Packers trade out of NFL’s first round 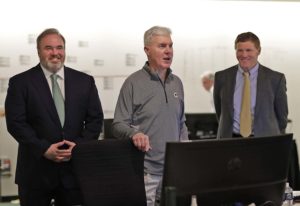 The Green Bay Packers moved out of the first round, sending the 29th overall pick to the Cleveland Browns for the Browns first pick in the second round, number-33 overall.  The Packers also get the Browns pick in round four, which is the first pick of day number three.

It’s the 20th time that Ted Thompson has traded down since taking over as the Packers general manager.

The Browns used the 29th pick on University of Miami TE David Njoku.

Trading down means the Packers won’t have a first round pick for the first time since 2008.  They traded out of the first round that year and selected Kansas State wide receiver Jordy Nelson, which worked out pretty well for the Packers.

The Packers will have three picks on day two, a pair of second round selections (number-33 and number-61) and a single pick in round three (number-93).

The way the rest of the first round unfolded, the Packers will still be able to get a cover corner if they covet that position with their first pick.  They won’t have a shot at Wisconsin outside linebacker T.J. Watt, who was selected by the Pittsburgh Steelers at number 30.