You are here: Home / Business / Proposal would allow unmanned delivery vehicles in Wisconsin 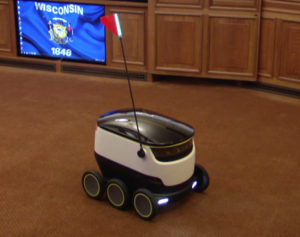 Small, self-driving vehicles the size of a cooler could soon be making deliveries in Wisconsin.

A bill being considered by state lawmakers would allow unmanned vehicles to travel on Wisconsin sidewalks and crosswalks. The legislation would require someone to be monitoring or controlling the devices remotely. It would also allow communities to prohibit the devices.

David Catania is with Starship Technologies, which has developed one of the personal delivery devices. The small, six-wheeled vehicle uses a system of cameras to map the area around it, allowing it to track objects or people that may block its path. Traveling at just a few miles an hour, the vehicle is designed to help carry items like food or packages on the last leg of their journey.

Catania told lawmakers that the continued growth of e-commerce means there will be an increased reliance on delivery trucks to get small orders to people’s homes. “This is a way that we can reduce the dependence on these large trucks,” he argued.

State Sen. Chris Kapenga (R-Delafield) and Rep. Mike Kuglitch (R-New Berlin), the bill’s co-sponsors, told lawmakers the legislation would help make Wisconsin a leader in an emerging technology. Kuglitch said it’s the job of lawmakers to help emerging technologies grow and to show they are welcome in the state.

The devices are already in use overseas, while pilot programs are underway in some U.S. cities.