You are here: Home / Legislature / State of the Tribes at the Capitol 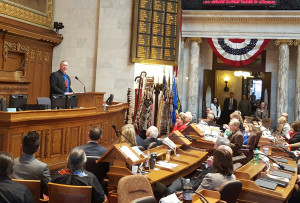 State legislators will hear an update on Wisconsin’s Native American tribes today at the Capitol.

Stockbridge-Munsee Community President Shannon Holsey will deliver the 13th annual State of the Tribes address this afternoon in the State Assembly. The speech is an effort to tell lawmakers about what is going on in tribal communities around the state.

Holsey’s appearance comes just a month after the Stockbridge-Munsee Community said it was withholding a $923,000 gaming compact payment to the state, because of a dispute over a Ho-Chunk casino expansion in Wittenburg. The Stockbridge-Munsee operate a casino-resort in Bowler, which is less than 17 miles away.