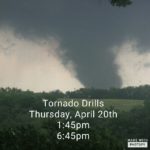 It’s Tornado Awareness Week in Wisconsin, and Tod Pritchard with Wisconsin Emergency Management says there are two statewide drills on Thursday. The first is set for 10:45 a.m. “That will trigger the sirens, radio and television stations. You’re weather radio will go off. Almost every school in state practices their tornado safety drill at that time.”

The second drill is set for 6:45 p.m. — only the second time an evening drill has been scheduled. “That’s a perfect time for families to get together” and go over their plans, Pritchard says. “You don’t want to wait until you hear the sirens to try and make a plan.”

According to the National Weather Service, Wisconsin averages 23 tornadoes annually. Last year, there were 16 tornado touchdowns in the state. All of the tornadoes were either an EF0 or EF1.

“But it’s not a matter of if Wisconsin will have a severe tornado, it’s a matter of when,” says Pritchard.