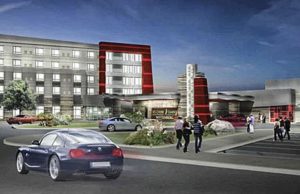 Artist rendering of the Ho Chunk Wittenberg hotel and casino

A tribe’s lawsuit is the latest move in a dispute over a casino expansion.

The Stockbridge-Munsee tribe has already threatened to withhold nearly one million dollars from the state, in a dispute over another tribe’s casino expansion in Shawano County. Now the tribe has filed a lawsuit to block the expansion.

The expansion of the Ho-Chunk casino near Wittenberg is just 30 miles away from the Stockbridge-Munsee’s only casino.