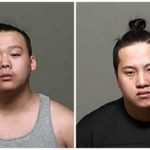 A 21-year-old Wausau man is headed to trial on charges that he brought a gun onto the Appleton East High School campus. Blong Vang faces felony counts of Conspiring to Cause Child Abuse, Possession of a Firearm on School Grounds, and Bail Jumping.

According to the criminal complaint, a school resource officer stopped 17-year-old Tou Thao and a 16-year-old in a building hallway after classes let out April 13, since he did not recognize them as students at East.

After confirming that they were not students, the officer went outside where he found a vehicle that was not registered to be at the school.  Vang was inside the car.

Appleton police officers searched the vehicle, and reportedly found a loaded gun in a paper bag and another handgun in a black bag. Investigators say both weapons were wrapped in the same bandanas that the two in the hallway were wearing, leading them to suspect possible gang affiliation.

The trio was allegedly at the school to get revenge on a student who had been bullying Vang’s girlfriend. Vang and the two teens told police they had no intentions to physically harm the student.

An arraignment hearing for Vang is scheduled for May 2 while Thao is due back in court Thursday.