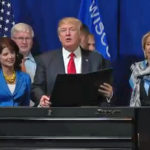 President Donald Trump signed a “Buy American” executive order in Wisconsin on Tuesday. Against the backdrop of an American flag made of wrenches, the President signed the order during a stop at Snap-on Tools corporate headquarters in Kenosha.

Trump, who was making his first visit to Wisconsin as president, also said he’ll order federal agencies to look at tightening a temporary visa program used to bring high-skilled foreign workers to the U.S. “This will stop. American workers have long called for reforms to end these visa abuses, and today their calls are being answered for the first time.”

Trump also pledged support for Wisconsin dairy farmers who are caught in the midst of a trade dispute with Canada. The president was joined in Kenosha by Governor Scott Walker, U.S. Senator Ron Johnson, along with Republican members of Wisconsin’s House delegation and GOP state legislators.