You are here: Home / Badgers / Two Badgers go on Day 1 of the NFL Draft 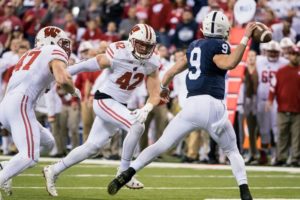 Wisconsin outside linebacker T.J. Watt and left tackle Ryan Ramczyk both thought they would hear their name called a little earlier, but when the smoke cleared, both ended up as first round selections in the 2017 NFL Draft.

Watt and Ramczyk became the seventh and eighth Badgers in the last ten years to become first-round picks.  Watt was taken with the 30th overall pick by the Pittsburgh Steelers and Ramczyk was chosen 32nd overall by the New Orleans Saints.

The pair became the 30th and 31st first-round picks in UW history. 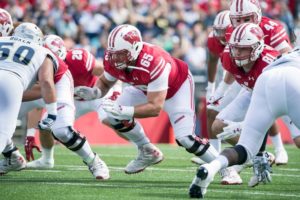 Watt, who is the first Wisconsin linebacker to be taken in the first round, continues a family tradition by joining brothers J.J. (Texans) and Derek (Chargers) as Badger products to be selected in the NFL Draft, while Ramczyk is the latest in a long line of UW offensive linemen to become first-round picks.

The pair also gave Wisconsin multiple first-round selections for the fifth time, something UW also achieved in 1985, 2000, 2001 and 2011.  The Badgers have seen at least one player taken in the first round in five of the last seven NFL drafts.

Ramczyk, a consensus All-American in his only season on the field for the Badgers, is the fifth UW offensive lineman to be taken in the first round since 2007.  That group includes 10-time Pro Bowler Joe Thomas of the Cleveland Browns and the NFL’s  highest paid center, Dallas’ Travis Frederick, and highest-paid guard, Cleveland’s Kevin Zeitler.

Despite switching positions from tight end just a year earlier, Watt became an All-American at outside linebacker by racking up 15.5 tackles for loss and a Big Ten- leading 11.5 sacks in 2016.

Both players are also Wisconsin born, which means all-time, 18 Wisconsin-born UW players have been taken in the first round of the NFL draft.