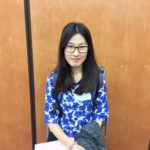 The Dane County Medical Examiner’s Office has identified 24 year-old Wenxin Huai as the student killed while walking in downtown Madison Saturday night. An autopsy confirmed she died from injuries caused when she was struck by an SUV.

Police say Huai died after being taken to a local hospital. Two other pedestrians had minor injuries that could be treated at the scene.

We are deeply saddened by the death of Wenxin Huai.

Wenxin, 24, was from Beijing, where she graduated from Peking University. She had been part of our campus community since 2015, studying economics and working as a research assistant in the Traffic Operations and Safety Laboratory.

She was due to receive her master’s degree in economics next month, which makes her loss especially painful. Our thoughts are with her family and friends.

Madison Police said the driver of the SUV, 32 year-old Kong Vang of Madison, was drunk when he veered onto the sidewalk Saturday night. He was released from the hospital and booked into the Dane County Jail Monday night on numerous counts, including homicide by drunk driving, and 2nd Offense OWI. A makeshift memorial has been set up at site of the accident, with flowers and other tributes to Huai.