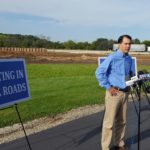 Governor Scott Walker says there’s “more than enough revenue” to fund the state’s transportation needs. With transportation funding expected to be the biggest issue in state budget negotiations, the governor reiterated his position at the Capitol on Monday.

“For us, I think there’s more than enough revenue out there. I’m willing to work with them (Republicans on the Joint Finance Committee),” Walker said Monday. “We, about a week and a-half ago . . . identified about a hundred million dollars more that was freed up.”

Walker said that in his meetings with Republican leaders in the legislature, that he thinks more money can be “freed up” from the state’s general purpose revenue stream. “I’m very confident we’ll reach a positive conclusion.”