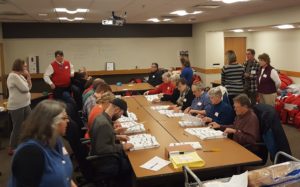 State lawmakers are being asked to advance a bill that would limit election recount requests to candidates who lost a statewide race by one percent or less.

The legislation from state Representative Ron Tusler (R-Harrison) and Senator Devin LeMahieu (R-Oostburg) comes in response to the statewide recount of the presidential race last fall, which was requested by Green Party candidate Jill Stein. Stein was criticized for the recount, which her campaign paid for, because she only received about one percent of the vote in the state.

Testifying on the bill Wednesday at the Capitol, Tusler said most of the public saw the recount as an unnecessary abuse of the system, which was used as a fundraising effort by the Stein campaign. “If we don’t do something, we’re letting them down,” he argued.

Stein’s campaign said at the time that it was requesting the recount in Wisconsin and two other states to give voters more confidence in the results, amid concerns that voting machines may have been hacked and due to other potential irregularities. The Wisconsin recount did uncover some missed ballots, but did not significantly change vote totals in the presidential race.

Senator Mark Miller (D-Monona) sad recounts can give voters more confidence in the results. “When you deny the ability of citizens…to verify the results of an election, you create the perception that something is being hidden,” he said.

Tusler and LeMahieu noted that recounts can still take place – but they will be limited to when the race was close and there’s a possibility it could change the outcome. For example, had Democratic presidential candidate Hillary Clinton requested a recount last year, they said it would have been allowed under the proposed legislation. Clinton lost Wisconsin to Republican President Donald Trump by 0.77 percent – about 23,000 votes.

The bill is currently being considered by a state Senate committee.