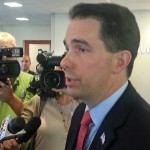 Criticism is being leveled as the state moves closer to drug testing for Medicaid recipients. The Walker administration is requesting a federal waiver to allow the state to implement the mandatory testing for childless adults on BadgerCare. Robert Kraig is executive director of Citizen Action of Wisconsin, a liberal advocacy group.

“Just to be clear, we think that this is mostly political, and that it’s terrible public policy,” Kraig said. The drug testing and other proposed changes to BadgerCare were included in the last state budget. A 30 day public comment period on the federal waiver request begins Wednesday.

Governor Scott Walker argues testing will help identify people who need treatment. “They’re spending, according to press reports, $48 million for drug testing across the public benefits programs,” Kriag said. “That’s $48 million that could go towards a much better substance use prevention and treatment program.”

Dr. Rich Brown, a substance use prevention expert at the University of Wisconsin School of Medicine and Public Health, said such testing is more complicated than simply drawing samples. “If it’s not done right, and if people are unfairly deprived of Medicaid and other assistance, the state could expect some expensive lawsuits,” Brown said.

Brown also said that drug tests are easy to circumvent. Most drug users can simply quit for a few days before a scheduled drug test, and pass the test. The Internet is full of guidance on how those who are using drugs can escape detection.”