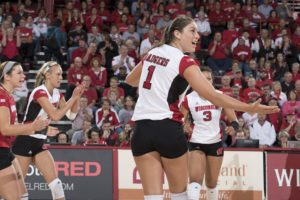 Lauren Carlini, who is the only four-time All-American in Wisconsin volleyball history, was named the 2017 AAU James E. Sullivan Award winner as the most outstanding U.S. amateur athlete who also demonstrates premier leadership, character and sportsmanship at a reception Tuesday night at the New York Athletic Club.  Carlini is the first UW student-athlete to win the prestigious award as well as the first volleyball player, male or female, to win.

The Sullivan Award has been presented annually since 1930 to the most outstanding amateur athlete in the United States.  Representatives from the AAU created the Sullivan Award with the intent to recognize contributions and achievements across the country of amateur athletes.  World renowned golfer Bobby Jones, co-founder of The Masters, received the inaugural award in 1930 and swimmer Anne Curtis became the first female to accept the award in 1944.

In the classroom, Carlini was a four-time Academic All-Big Ten selection and earned Academic All-America honors in 2016.