You are here: Home / Sports / Antetokounmpo named to the All-NBA team 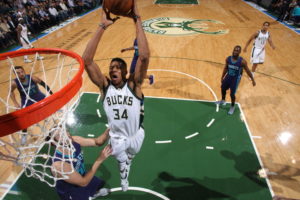 Antetokounmpo, who was chosen an all-star for the first time this past season, finished the regular season averaging 22.9 points, 8.8 rebounds, 5.4 steals, 1.9 blocks and 1.6 steals a game.  He was the only player in the NBA to lead his team in all five categories and just the fifth player in league history to do it.

Antetokounmpo became the first Bucks player to play in the All-Star Game since 2004 when Michael Redd did it.  He is the first starter since 1986 (Sidney Moncrief).

Antetokounmpo led the Bucks to a 42-40 regular season record, which got them into the playoffs as the sixth seed in the Eastern Conference.  The Bucks took the third-seeded Toronto Raptors to six games in a first-round playoff series before losing the series 4-2.

The All-NBA team was chosen by a panel of sportswriters and broadcasters.