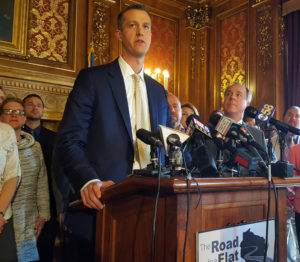 Dubbed “The Road to a Flat Tax,” the plan spear-headed by Brookfield Republican Dale Kooyenga would reduce the minimum mark-up rate on fuel sales, cut the gas tax by about $0.05, and apply the five-percent state sales tax to gasoline purchases. It would also move the state towards implementing a flat income tax of 3.95 percent.

“We’re going to cut taxes,” Kooyenga said during a press conference Thursday at the Capitol. “In fact, this overall packages has at least a minimum of $450 million of tax cuts for the $350 million in additional revenue in the tax package.”

The proposal comes after members of the budget-writing Joint Finance Committee scrapped Governor Scott Walker’s proposal to borrow and cut spending to help address a shortfall in the state transportation fund. Walker has said he will veto any attempt to raise the gas tax though, unless it’s offset in some other area.

Democrats moved quickly to criticize the plan though. Assembly Minority Leader Peter Barca (D-Kenosha) said Republicans are making tax breaks for the wealthiest residents a top priority with a plan that will not fix transportation funding in a sustainable way. “It’s hard to imagine six that….six years into Republican-led government, and they still do not have a plan to create a sustainable transportation system,” Barca said.

Barca said Democrats will work to introduce their own transportation plan, which could include such provisions such as a return to gas tax indexing.

The plan would need the governor’s support, along with the backing of Senate Republicans.

In a statement, Senate Majority Leader Scott Fitzgerald (R-Juneau) appeared cautious about the chances of his members supporting the Assembly proposal. “The transportation and tax plan that Assembly leadership rolled out today contains a number of good ideas that are worth a closer look,” he said. “I plan to review the proposal in its entirety to determine how closely it reflects Senate transportation priorities as discussions on infrastructure funding continue.”

The governor’s office did not immediately respond to a request for comment. Walker said earlier this week though that he was waiting to see a final version of the plan.