You are here: Home / Agriculture / Bill to allow woodchuck hunting in Wisconsin gets hearing 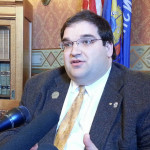 Legislation to allow hunting and trapping woodchucks in Wisconsin gets a hearing at the Capitol. Forget about the wood they chuck — state Representative Andre Jacque (R-DePere) said woodchucks can do a lot of damage to farmers and gardeners. “They eat up their crops, and dig holes in the fields that may damage plows and trip up livestock,” Jacque told members of the Assembly Natural Resources committee during a hearing for his bill on Wednesday. Wisconsin Trappers Association president Scott Zimmermann said woodchucks also cause damage by burrowing around building foundations.

The bill would allow woodchucks — also knows as groundhogs — to be hunted and trapped in Wisconsin, which is already the case in many other states. Committee chair, Representative Joel Kleefisch (R-Oconomowoc) noted this isn’t the first time such legislation been offered. “For some reason, this woodchuck has seen its shadow in the past and has not made it to the governor’s desk.”

Landowners are currently allowed to hunt and trap woodchucks on their own property. They’re protected elsewhere, and outdoors writer Bob Schuh of Manitowoc notes that’s a problem. “The situation now has become that they are so many of them . . . people want to know what they can do. And there’s really nothing they can do.”