You are here: Home / Packers / Buffalo settles on Beane to fill GM vacancy 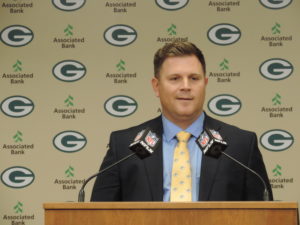 Beane’s hiring caps off a short search after Doug Whaley and his entire scouting staff were fired the day after completion of the NFL draft.

The 40-year-old Beane has spent his entire 19-year career working his way up through the Carolina Panthers’ ranks.