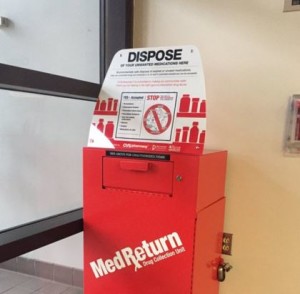 Prescription drug drop boxes can be found at police departments all over the state and they are supposed to be an easy way for people to discard old or unused medications. But last week the Green Bay Police Department found more than what they bargained for while emptying the box located in their lobby.

Police Captain Kevin Warych says staff found a rolled up brown paper bag inside the box, which contained a Ziploc bag of white powder. Testing showed that powder was actually 11 grams of cocaine, with a street value of about $500.

Warych says it’s the first time cocaine has been found in the box, although other items have shown up before. “Sadly, we’ve seen people drop needles in the drug box. There are warnings for people not to drop any needles and those can be disposed of at other proper locations within the city.”

Ashwaubenon Public Safety Captain Jody Crocker says they have had issues in the past with syringes and liquid medicines being placed in their drug drop box…but not anymore. “Since then our box has been modified to only except pills in singular forms, so even the bottles don’t go in the containers any more.

Attorney General Brad Schimel recently announced the April 29th Drug Take Back Day was record breaking with over 66,000 pounds collected across Wisconsin. There are 328 permanent drug disposal drop boxes located around the state.