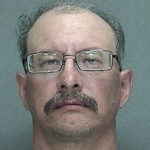 A man with a history of incidents involving sexual abuse of animals has been arrested again — this time by the Brown County Sheriff’s Office.

According to jail records, 53 year old Sterling Rachwal was arrested for three counts: burglary, mistreatment of animals causing death, and sexual gratification with an animal.

Formal charges have not been announced, and Rachwal did not appear in court Tuesday. No further details of the accusations have been released.

Rachwal has been convicted several times across the state for incidents with animals, often horses.

In 1993 in Monroe County, he was convicted of three counts, including sexual gratification with an animal and mistreatment of animals causing death. He was sentenced to an eight-year prison term.

In 1996 in Waupaca County, he was convicted of four counts, including mistreating animals – but was declared not guilty by reason of mental disease or defect.

In 2010 in Fond du Lac County, he was convicted of disorderly conduct and sentenced to 90 days in jail. In that incident, he was found in a horse barn.