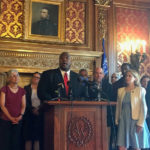 At the Capitol, lawmakers call for statewide standards in police use of deadly force. “Though we know there are instances where force – including lethal force – must be used, our goal is to make sure that officers receive training . . . on other options,” said state Representative Chris Taylor (D-Madison).

The package of bills from Democrats has support from community leaders, including the Reverend Alex Gee of Madison — himself the brother of a police officer. “What I appreciate about this legislation is that it doesn’t appear, in my opinion, to be one-sided,” Gee said. “It really wants to make sure that all lives are enhanced and that everyone can come home.”

One measure would require that police officers receive annual training in “de-escalation” techniques. Michael Johnson is CEO of the Dane County Boys and Girls Club. “We have a responsibility as a community to tackle these tough issues, and have an honest conversation around how we make sure that police officers remain safe, but those who are vulnerable and our citizens stay alive,” Johnson said.

Other bills would require law enforcement agencies to adopt uniform use of force policies, and make them readily available on-line. None of the bills are likely to advance without support from Republicans. “I am always talking to my Republican colleagues about this issue,” said Taylor. “We are working to get bipartisan support of these initiatives. That’s extremely important.”