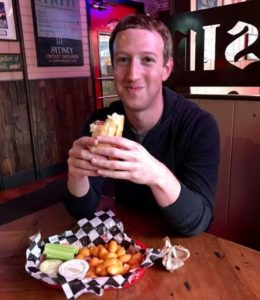 Facebook CEO Mark Zuckerberg has checked off Wisconsin from his list of all 50 states where he plans to meet people by the end of the year.

He posted photos from his visits on Sunday to Jed Gant’s dairy and beef cattle farm near Blanchardville — and he then stopped in Madison to eat at State Street Brats near the UW campus.

On his Facebook page, Zuckerberg wrote that Gant has not taken a trip away from his farm since 1981 because he doesn’t have enough help — and he doesn’t want to “leave his livelihood in the hands of someone else.”

Zuckerberg said Facebook users suggested his dinner stop at State Street Brats — where he said he “basically inhaled” cheese curds and his first brat before he remembered to get a photo of his second brat.