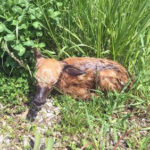 Fond du Lac County Sheriff’s Deputy Jason Fabry showed compassion in helping out the smallest victim of a car-deer crash on Highway 49 north of Waupun Thursday. Fabry found a fawn lying next to its mother which had been killed. The impact of the crash hastened delivery of the baby deer, but it was not injured.

Sheriff’s Captain Ryan Waldschmidt says after consulting with a Sheriff’s sergeant the deputy put the fawn in his squad car and took it to a certified wildlife specialist near Slinger.

Judy Stephenson specializes in helping wildlife recover. She takes in wild animals that are injured gets them healthy enough to release back into the wild.

Since the collision happened in the area of Highway 49 and Whoolie Road, the fawn has dubbed Hoolie too, but with a different spelling.