You are here: Home / Packers / Gutekunst interviews with Buffalo 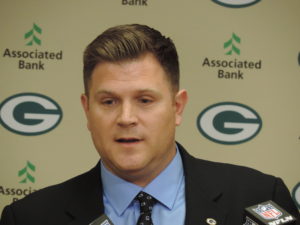 Members of the Green Bay Packers’ personnel department continue to attract attention for open jobs around the NFL.

On Monday, the Buffalo Bills announced they interviewed Packers director of player personnel Brian Gutekunst as they search for a new general manager.

Gutekunst has been with the Packers for 18 seasons, including the last two as their director of player personnel.  He interviewed for the San Francisco 49ers’ vacancy earlier this off-season, but the 49ers hired former NFL safety John Lynch.