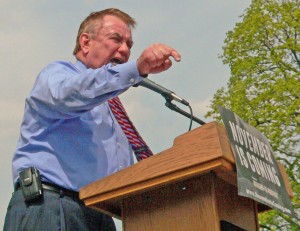 More than 30 years after he first took office, an event at the state Capitol Tuesday will look at the legacy of former Wisconsin Governor Tommy Thompson.

Dubbed “Tommy at 30,” the public policy symposium will focus on three areas where Thompson had a profound impact on Wisconsin – welfare reform, school choice, and jobs and the economy. “The intent is to look at the policies that were put in place back then, how they held up, and what their applications are today,” says spokesman Brian Nemoir.

The symposium will look at the effect those policies have had on Wisconsin and at the national level, after several of the reforms helped inspire policy changes in other states and at the federal level.

The event, which will take place in a hearing room at the Capitol from 9 a.m. to noon, will also look at the electoral legacy of Thompson, who was a Republican that enjoyed broad support across party lines during his 14 years in office. “We’re in a different political era now, and being able to compare and contrast is an important exercise,” Nemoir says.