You are here: Home / Legislature / Senate and Assembly remain divided on transportation funding 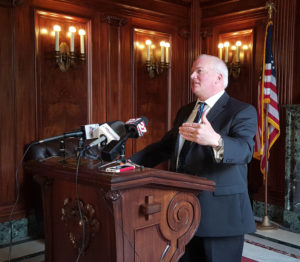 When it comes to figuring out how to pay for transportation funding in the state budget, Assembly and Senate Republicans appear to be heading in different directions.

A plan introduced last week by the Assembly GOP calls for cutting the state’s gas tax by five percent, while applying the state sales tax to fuel purchases. Governor Scott Walker over the weekend indicated he does not support the proposal…a sentiment shared by Senate Majority Leader Scott Fitzgerald (R-Juneau) on Wednesday. “I don’t see the momentum for that plan ultimately being adopted and being part of this budget right now,” Fitzgerald told reporters.

The Juneau Republican said his members are eyeing the possibility of using borrowing and spending from the state’s general fund to keep road projects on schedule, although he did not offer a dollar amount. He said the Assembly plan is off the table in his view, given Walker’s previous statements that he will veto a budget that includes tax hikes to pay for roads that are not offset in another area.

Assembly Republicans have opposed the use of borrowing to pay for roads, which Rep. John Nygren (R-Marinette), who co-chairs the Legislature’s budget committee, said would grow debt in an area that would compete with schools, Medicaid, and other priorities. Nygren said the Assembly GOP is looking for a “transportation-focused solution” to a shortfall in revenue.

Nygren acknowledged that the two chambers remain far apart, with just a little under two months until the budget is supposed to completed. “Positions change from day to day it would appear…we got time to hopefully get where we can come together,” Nygren said. “I would agree that today we’re not in the same place.”