You are here: Home / Fires/Accidents/Disasters / State of emergency declared in tornado damaged areas 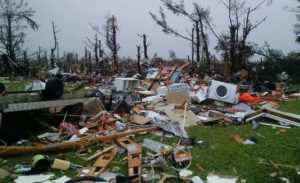 Governor Scott Walker has declared a state of emergency in three northwest Wisconsin counties damaged by a strong tornado on Tuesday, which killed on person and left dozens more homeless.

The declaration covers Barron, Rusk, and Jackson counties. It paves the way for state agencies to provide assistance to those impacted by the storm that destroyed 38 mobile homes near Chetek, and badly damaged nearly a dozen more. The storm killed 45-year-old Eric Gavin and also injured 27 people.

The governor toured the damaged areas Wednesday, while the National Weather Service classified the tornado as an EF-2 plus – with peak winds of 120 miles per hour.

Another line of thunderstorms rumbled through the state on Wednesday, leaving another path of damage.

Jackson County emergency management officials urged motorists to stay off the roads Wednesday night, with numerous trees and power lines down as well as flooding that caused Highway 121 and a number of town roads to close. Winds hit 66 miles an hour in Marshfield in the afternoon, as utility poles snapped and one business was damaged. Rhinelander had a record rainfall for the date of almost 2.2 inches, a barn was blown down near Darien, the Whitewater and Beloit areas had numerous trees down, and there was lesser damage throughout the southern half of Wisconsin.

As of Thursday morning, almost 18,000 electric customers throughout the state were without power.