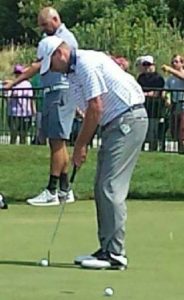 Kevin Kisner shot a 4-under par 66 to finish at 10-under 270 to win the PGA’s Dean & DeLuca Invitational at Colonial in Fort Worth, Texas on Sunday.

Kisner had a clutch par save on the 18th hole to hold on for the win.  He finished one shot ahead of Jordan Spieth, Sean O’Hair and Jon Rahm.  Spieth shot a bogey free 65.

It’s the second PGA Tour victory in 148 starts for the 33-year-old Kisner.  He was a runner-up twice this year.

Madison’s Steve Stricker had a strong finish, closing with a 63 to finish just four shots off the lead.

Stricker played the first three days of the event at 1-over par.  His 7-under final round pushed Stricker to 6-under par total.