You are here: Home / Education / UW Madison center to be named for Tommy Thompson 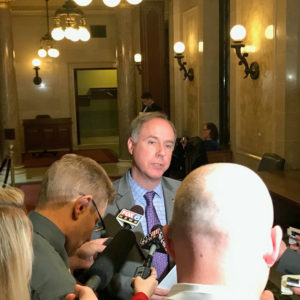 “We will continue our efforts to have longterm, bipartisan solutions that bring the best in academia together with the best in government to find longterm solutions that continue to move Wisconsin forward,” said Assembly Speaker Robin Vos (R-Rochester).

Walker called it a fitting tribute to a Wisconsin legend. “Someone who will continue to have an impact, not just in the public policy world in terms of his direct impact, but now through this new center we’ll have the ability to pass that on to future generations,” Walker said.

“Just as he did during his time as governor, the Tommy G. Thompson Center is going to be committed to bringing people together, to discuss and develop policies that will improve public and political leadership, and the practices of American government,” said UW-Madison Chancellor Rebecca Blank.

Blank added that the Thompson will embody three principles that Thompson – a staunch supporter of the UW System – expressed throughout his career. “First, a belief in the value of objective, nonpartisan, professional research used to inform public policy. Second, a belief that public universities, and in particular their faculty, have a central role to play in discussions and in public life. And thirdly, a belief in the ‘Wisconsin Idea.’ The idea that the university has a fundamental duty to ensure that the discoveries and the knowledge that happen on campus are spread across the state, and even beyond.”

“We know that in today’s world, far too often it seems like there’s only one point of view on college campuses, so our job here is to make sure that we continue the effort to have maximum free speech on campus,” said Vos. “Hopefully it will be able to offset some of the liberal thinking.” Funding for the Thompson center is contained in a budget provision to be considered by the Legislature’s Joint Finance Committee. It commits $3 million in state funding over the two-year budget cycle. Some Democrats are already voicing skepticism on the need for it.