You are here: Home / Sports / Vodenlich reaches 500 wins at Whitewater 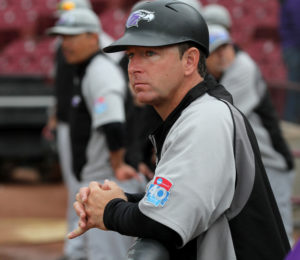 One day after clinching the WIAC regular season baseball title, UW-Whitewater coach John Vodenlich earned his 500th victory at the school in a 23-6 win over UW-Oshkosh.

The Warhawks went on to sweep the double-header, then win two more games at St. Norbert College on Sunday to finish the regular season with a 32-6 record, 17-3 in league play.  It also gives Vodenlich 503 career wins at Whitewater and 532 wins overall, counting his two year stint as head coach at Edgewood College.

Vodenlich, who is in his 14th season at the school, is the fourth coach in WIAC history to reach the 500 win milestone.

Whitewater will host the four-team WIAC Tournament this Friday and Saturday.  The top-seeded Warhawks will host Oshkosh in the second game of the tournament at 1 p.m. Friday afternoon.  Third-seeded Stevens Point faces 2nd-seeded La Crosse in the opener at 10 a.m. on Friday morning.

The WIAC Tournament champion will receive an automatic bid into the NCAA D-3 Tournament at Fox Cities Stadium.