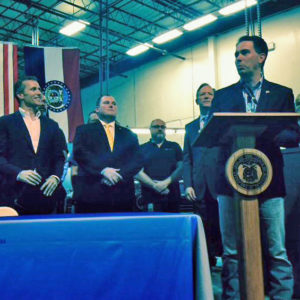 Wisconsin Governor Scott Walker is no stranger to higher political aspirations. He was among several Republicans who ran for president in 2016. Recent moves by Republican Governor Eric Greitens have led to questions about his future ambitions. There’s been talk about him possibly eyeing a future run for U.S. Senate, Vice President and President.

One example is Walker’s attendance at Greitens’s bill signing on Tuesday about union pay restrictions. Missourinet asked Walker who’s grooming who? Walker responded with a chuckle and then continued with a general statement.

“I think we’re more than happy to help a fellow governor get up on their feet again,” said Walker. “With a Republican president, we’re focused on being good governors.”

When pressed further, Walker said he was in town for something else and having dinner with some friends.

“Eric asked me to come on by,” said Walker.

There is speculation that Greitens will seek higher office. Since taking office in January, Greitens has traveled to Washington D.C. a few times to visit with Vice President Mike Pence and other members of President Trump’s cabinet.

Greitens has also been on Fox News a few times since being sworn in. In March, Fox News Sunday and Chris Wallace chose him as its “Power Player of the Week”.