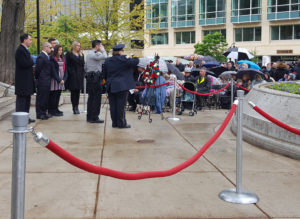 A cold rain fell on Madison Friday, as three names were added afternoon to the Wisconsin Law Enforcement Memorial outside the state Capitol building.

The names joining the now 273 listed on the memorial included Salem Public Safety Officer Michael Ventura, who was killed in a crash while responding to a call in July of last year, Rusk County Sheriff’s Deputy Dan Glaze, who was shot and killed in November while investigating a report of a suspicious vehicle, and Milwaukee Police Officer Charles Gudgell, who was killed in 1916 while on traffic duty.

Attorney General Brad Schimel said the humanity of those officers prompted them to make sacrifices that led to their deaths. “We must not take those sacrifices for granted,” he said.

Governor Scott Walker noted that there was some comfort in the name of Officer Gudgell being added more than a century after his death, which was discovered through historical research. “Even for a name being added from a century ago, we never forget,” the governor said.

Hundreds of officers from across the state gathered at the Capitol to honor those killed in the last year, along with those added to the wall in previous years.