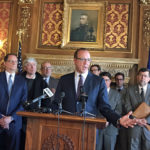 Wisconsin pays the nation’s lowest rate to defend the poor in court. It’s 40 dollars an hour and it hasn’t increased since 1978. A group of attorneys on Thursday petitioned the state Supreme Court to increase the rate to 100 dollars per hour.

Milwaukee Attorney John Birdsall, who chairs the Indigent Defense Funding Committee for the state’s Association of Criminal Defense Lawyers, said they can’t meet expenses at the current rate, and that defendants suffer as a result. “Having a lawyer without resources or the incentive to defend a client is like having no lawyer at all,” Birdsall said.

“The underfunding of indigent defense has provoked a constitutional crisis in this state that must be rectified,” said “Making a Murderer” attorney Jerry Buting, who was joined at the Capitol press conference by fellow Steven Avery attorney Dean Strang. “This not a partisan issue. This rate has remained unchanged through Democratic and Republican governors and legislatures.

The lawyers are requesting an increase to 100 dollars an hour — at a cost to the state of about $34 million per year to cover approximately 55,000 publicly appointed cases. Birdsall warned of what could happen if the issue is not addressed. “A lot of people will just make the decision, collectively or individually, to just not take these anymore. Literally, the whole system could collapse.”