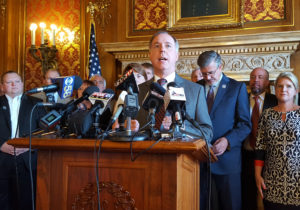 While Assembly Republicans were hoping to spark new life into ongoing talks over a stalled state budget process Tuesday, their plan to fund K-12 education appeared doomed before a press conference at the Capitol even got underway.

“The Assembly package that was endorsed today is simply not the direction that this budget is headed,” read a press release from Senate Majority Leader Scott Fitzgerald’s (R-Juneau) office, sent just minutes before a press conference was set to begin.

The Assembly GOP outlined a plan that they say will put more money in Wisconsin classrooms and lower property taxes below 2010 levels. However, it falls short of a pledge by Governor Scott Walker to reduce property taxes below 2014 levels, which means it’s unlikely to pick up needed support from majority Republicans in the Senate. Still, Joint Finance Committee co-chair John Nygren (R-Marinette) said he hoped it would help to move the discussions along. “While comprehensive, this plan is a starting point for negotiations with our friends in the Senate,” he said.

Work on the proposed biennial budget between the two chambers has stalled, due to disputes over education and transportation funding. Senate Republicans have largely been in line with the governor, while the Assembly GOP wants to explore alternatives. “I don’t get why we would say why we don’t want to improve his plan,” asked Assembly Speaker Robin Vos (R-Rochester). “I think his plan is probably overwhelmingly good, but we as legislators – a co-equal branch of government – want to improve the plan.”

The speaker also responded to statements Fitzgerald made on Monday, where he told reporters the Senate could look to write its own budget if the stalemate continues. “There is absolutely no reason to make threats,” Vos said, noting that there has never been a situation since the Joint Finance Committee process was created in which the two chambers passed their own budgets while one party was in control of both.

Vos said he’s willing to negotiate, as long as people don’t draw “hard lines in the sand” before even hearing the other side’s ideas. “Our job is to find answers, that’s what the people elected us to do,” Vos said. “They didn’t elect us to be rubber stamps, they didn’t elect us to check our brain when we walked inside the Capitol.”

The state’s fiscal year ends on June 30. However, if a budget is not passed before then, the state continues to operate at the prior fiscal year’s funding levels.

During a stop in Wisconsin Dells Tuesday, Governor Walker said he still believes lawmakers can finish up close to the deadline. “My hope is that in a month or so, I’ll have a budget,” Walker said.

The governor said he expects there to be differences when both chambers have such sizable majorities, but he does not see any of the current issues holding up the budget as something lawmakers will be unable to overcome.