You are here: Home / Brewers / Brewers use the long ball to clobber Cincinnati 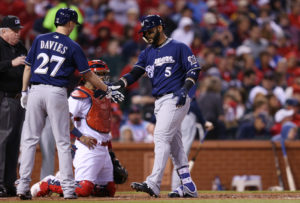 The Milwaukee Brewers clubbed six home runs on Thursday night and rolled to a 11-3 win over the Cincinnati Reds at Great American Ball Park.  They salvaged the final game of their three game series with the victory.

Jimmy Nelson (6-4) earned the victory, pitching seven strong innings.  He allowed just two runs on three hits with one walk and 11 strikeouts.  Two of the three hits allowed were home runs off the bat of Joey Votto, his 22nd and 23rd of the season.

The Brewers clubbed six home runs in a game for the sixth time in franchise history.  It’s the first time they’ve accomplished the feat since September 9, 2007.

Ryan Braun’s first inning home run is the 39th in his career off of Reds pitching.