You are here: Home / Brewers / Brewers wait through delays to hold off Cardinals (AUDIO) 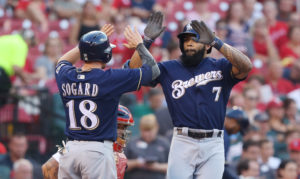 The Brewers added an insurance run in the 7th when Domingo Santana doubled and Hernan Perez singled to right with two outs to drive him in.

The first delay came after 6 1/2 innings and lasted 50 minutes.  The second came after a two-run home run by Aledmys Diaz, which made it 7-6.  That delay would last an hour before Corey Knebel came on to record a four-out save.  Knebel struck out Dexter Fowler to end the game, extending his streak of appearances with at least one strikeout to 34.

AUDIO: Craig Counsell on the Brewers jumping out to a big early lead :15