You are here: Home / Crime / Courts / Court rules school meeting should have been open to public 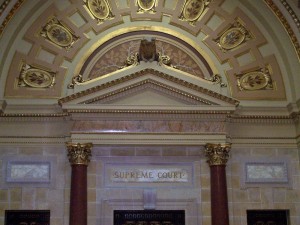 The state Supreme Court has ruled an Appleton school committee illegally closed its meetings to the public.

The case stems from a lawsuit brought by district resident John Krueger, who was denied access to nine committee meetings held between October 2011 and March 2012. The committee was discussing concerns Krueger raised about sexual themes and obscene language used in a book taught in 9th grade English classes. Krueger argued the district violated the Wisconsin’s Open Meetings Act by not allowing the public to attend those meetings.

The Appleton School District argued that since the committee had not been created by the school board, it was not subject to the open meetings law. The circuit court and court of appeals both sided with the district, but the state Supreme Court unanimously reversed that ruling, finding that the committee was authorized under rules created by the district, so its meetings should have been open to the public.

Proponents of open government celebrated the ruling as a victory for transparency. In a statement, Appleton School District officials said they appreciate the clarification, and will work to make sure they are in compliance with the court’s decision moving forward.