You are here: Home / News / Laning hangs on to Democratic Party of Wisconsin chairmanship 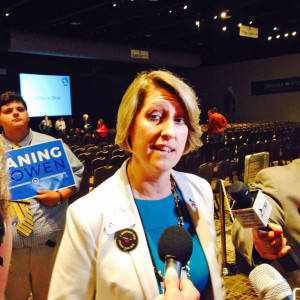 Despite suffering heavy losses last November, Democrats voted at their state convention this weekend to stick with their current party leader for another two years.

During a speech at the convention, Laning acknowledged that the November elections were devastating to Democrats, as the party lost seats in the state Assembly and Senate, failed to return Russ Feingold to the U.S. Senate, and saw a Republican win the state’s presidential race for the first time since 1984. “I wish I had been able to get the resources out there sooner, because if we had the party that we are building in this year…we would have won,” she argued.

Laning presented a strategy at the convention of getting the party more organized at the local level during the off year between elections, which she believes will help spread Democrats’ message to areas of the state that traditionally lean towards Republicans. She argued that will lay the groundwork needed to give the party the results members want in 2018 – defeating Republican Governor Scott Walker, re-electing U.S. Senator Tammy Baldwin, and sending President Donald Trump a “strong message.”