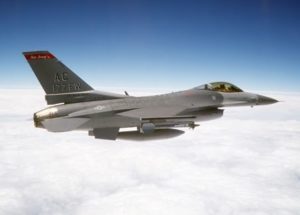 Two F-16 fighter jets circled the airport in Juneau Tuesday afternoon, after escorting a small plane there that had violated airspace restrictions in place because of President Donald Trump’s visit to southeastern Wisconsin.

Dodge County Sheriff Dale Schmidt interviewed the pilot, who was unaware he violated the air space restriction. “He told me that he took off from Burlington and was just going out with a flight with his wife…when he was contacted by a military jet and told to land at Dodge County,” Schmidt said.

Schmidt said he took the pilot’s information and passed it on to the FAA.