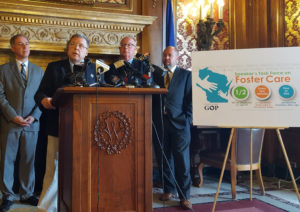 A new task force launched by the Assembly Speaker will look at possible reforms to the state’s foster care system.

Republican state Representative Pat Snyder (R-Schofield) will co-chair the task force, which will look at ways to help everyone involved in foster care. Snyder said the goals he sees are to “provide relief to those who have entered the foster care system, those that are aging out of the foster care system, and providing assistance to prevent at-risk families from entering this system in the first place.”

The number of children in the state’s foster system has been on the rise in recent years, with almost 7,20 in out-of-home care in 2015. Snyder and Assembly Speaker Robin Vos (R-Rochester) noted that many of those children will end up homeless or face difficulty finding employment after they turn 18, and can no longer be in foster care. “We need to find ways to better serve our most vulnerable citizens who, at no fault of their own, are put in challenging circumstances,” said Vos.

While the state does not currently face a shortage of foster care providers, Snyder said many of those who do provide care are getting older, so the state should be looking at ways to get newer homes in the pipeline for the future. Vos said that could also involve looking at raising reimbursement rates for those who take in children.

The task force plans to hold hearings around the state, which will help develop potential legislation.