You are here: Home / News / Trump pushes for Obamacare repeal in Wisconsin stop 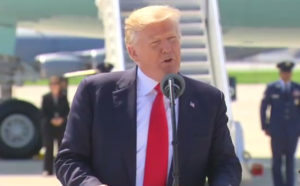 President Donald Trump used a brief speech in Milwaukee Tuesday to continue his call for Congress to repeal the Affordable Care Act.

Minutes after landing in Milwaukee, the president stepped off Air Force One and met two Wisconsin families who have been affected by Obamacare provisions – Michael and Tammy Kushman from Marinette County and Robert and Sarah Stoll of Kenosha. The president described how both families have faced rising premium costs under the health care law, and have been forced to switch to different plans to get insurance.

“These are sad but familiar stories in Wisconsin, where Obamacare premiums have doubled,” Trump said. “Obamacare is one of the greatest catastrophes that our country has signed into law — and the victims are innocent, hardworking Americans.”

The U.S. House has already passed a bill that would repeal the ACA, while the Senate is working to craft its own version of the bill. Trump criticized Democrats for opposing the effort, saying “No matter how good it is, we will get no obstructionist Democrat votes. No matter how good it is — if it’s the greatest healthcare plan ever devised, we will get zero votes by the obstructionists, the Democrats.”

No Republicans voted for the health care reform law when Democrats passed it in 2010.

The president then traveled to Waukesha County Technical College to learn about apprenticeship programs and participate in a roundtable with education officials and business leaders. He’s also scheduled to attend a fundraiser for Governor Scott Walker later this evening in Milwaukee.