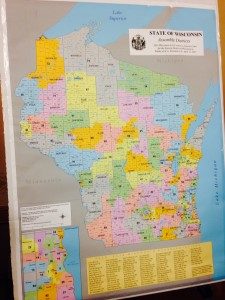 The U.S. Supreme Court will decide the constitutionality of Wisconsin legislative districts as drawn by majority Republicans in 2011. By a vote of 5-4, the court also granted Wisconsin Attorney General Brad Schimel’s application for a stay in the redistricting case, Gill v. Whitford.

The stay prevents implementation of a ruling by a three-judge panel, which would have required the Wisconsin Legislature to redraw district maps in  time for the 2018 elections.

“The stay is particularly important because it preserves the Legislature’s time, effort, and resources while this case is pending. In our stay application, I argued that requiring the Legislature to re-draw district maps this year would have been a waste of resources. I also argued that it was likely that the lower court’s decision would be eventually overturned. I am pleased that the Court granted our request on this important issue.”

The high court is expected to hear arguments this fall on the state’s appeal of the federal judicial panel’s January ruling, which threw out the Republican maps. Democrats filed suit and claimed the GOP jammed the opposing party into districts which gave them very little chance to win a legislative majority during the decade.

This is the first time in more than ten years that the justices will consider allegations of gerrymandering — and observers see the their final ruling as one which impact how elections are run throughout the nation.

Asked to comment Monday, Governor Scott Walker said,” ‘One person, one vote,’ the principles of community of interest, ensuring minority voting rights, all those things are protected in the plan that was passed by the Assembly and the Senate that I signed into law and I believe, in the end, the United States Supreme Court will uphold it.”

Critics have argued the current legislative maps unfairly stack the deck for Republicans district by district, pointing to the 2016 presidential election results as an example.

“The maps were in place and Republicans gained seats in ’12, ’14, and ’16. If your argument is the maps are unfair, it should only happen once,” Walker said. “The reason they’ve won and added seats in the legislature is because common-sense, conservative reforms work.”