You are here: Home / News / Wisconsin Democrats focus on rebuilding at state convention 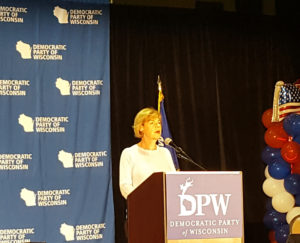 Following a 2016 election cycle that saw big wins for Republicans, many of the speakers at the Democratic Party of Wisconsin’s state convention in Middleton this weekend emphasized the need to prepare now for the 2018 cycle.

DPW chair Martha Laning opened the convention Friday night by calling on delegates to help “turn on the off year” and return the party to grassroots organizing. “Our candidates need a strong team in every corner of the state,” she said.

Laning faces three challengers as she seeks reelection to party chair – Joe Donovan, Eric Finch, and Bryan Kennedy. The race will be decided on Saturday afternoon.

Assembly Minority Leader Peter Barca (D-Kenosha) described the 2018 election as a “the worst gut check” of his life. However, he said he’s been encouraged by the response he’s seen since the election, starting with marches by women in January and the reaction to the policies of President Donald Trump’s administration. “You know, there’s a lot of terms that could describe President Trump, but one thing I can assure you – it won’t be two terms.”

Members of the state’s Congressional delegation expressed optimism about what next November may have in store for Democrats, if the party can reach out to voters who drifted away in 2016.

Rep. Mark Pocan (D-WI) noted Democrats had about 200,000 fewer votes in Wisconsin last year than in the 2012 election. “We have to make them care again, and we do that by prioritizing them,” he said. “Most people think from their pocketbooks, and we need to let them know that the GOP is after theirs’.”

Rep. Ron Kind (D-WI) criticized Trump’s “self-defeating smugness of America First” and his attacks on the judiciary, the press, and the intelligence communities. “We can’t make America great again until we make America good again,” Kind argued, referencing the slogan of Trump’s campaign.

Sen. Tammy Baldwin (D-WI), who faces reelection to the U.S. Senate next year, urged Democrats to be who people can count on to fight and lead. “The people of Wisconsin need champions, and they’re not going to find them in the Republican Party,” she said.

While several speakers also offered criticism for Republican Governor Scott Walker, delegates did not hear any speeches from candidates who are mulling a run against him next November. Several Democrats have already bowed out of contention, and just one candidate has stepped forward so far – 25-year-old Barneveld native Bob Harlow.

Rep. Pocan told delegates not to believe the “false narrative” from Republicans that Democrats don’t have a strong candidate to run against Walker next year. “The election is 17 months away…do you really want a presidential campaign-style death march for the next 17 months?”

Pocan said the winner of such a competition would be the candidate most willing to sell out. “We’re going to have several great candidates, and I am not worried,” he said. “Scott Walker will have the election of his lifetime next year.”