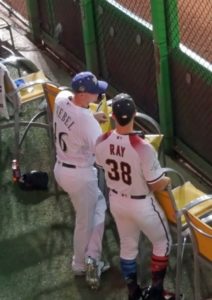 Robinson Cano’s 10th inning leadoff home run off of Chicago’s Wade Davis gave the American League a 2-1 win over the National League in the 88th Major League Baseball All-Star game in Miami.  It’s the fifth straight all-star victory for the American league and the 12th in the last 15 games.

Pitching dominated the summer classic as the two teams combined to strikeout 23 times.

The National League’s only run came in the 6th inning when St. Louis catcher Yadier Molina homered to right.  Molina improved to 5-for-8 with a home run and two RBI in his All-Star career.

National League skipper Joe Maddon used nine pitchers in the 2-1 loss.  Milwaukee Brewers closer Corey Knebel (pictured) wasn’t one of them.  Maddon went with his own closer, Wade Davis instead.

Knebel said had the game one to the 11th inning, he was scheduled to pitch.

The Brewers reliever said not pitching doesn’t take away from his all-star experience, which was tremendous.