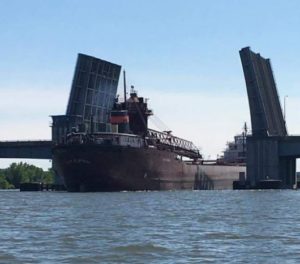 The U.S. Coast Guard and police are investigating the crash of a large cargo ship at a dock in downtown Green Bay.

Officials say the Kaye E. Barker was moving north toward the bay when it slammed into a dock, crushed a 16 foot pleasure boat, and damaged a maintenance walkway on the Ray Nitschke draw bridge on the city’s Main Street.

No one was in the small boat when the incidents occurred Sunday afternoon, and no one was hurt.

Police say they have questioned the operator of the cargo ship.

The draw bridge reopened early Sunday evening after being shut down for about three hours.