You are here: Home / Health / Medicine / Democratic bill would legalize marijuana in Wisconsin 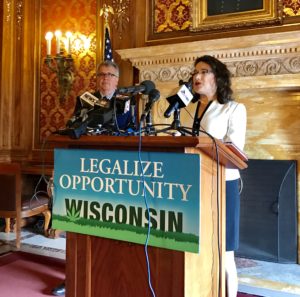 As more states begin to look at legalizing marijuana as a way to generate new revenue, a Democratic state lawmaker once again wants to add Wisconsin to the list of those considering the move.

Announcing the bill on Thursday at the Capitol, state Representative Melissa Sargent (D-Madison) pointed to the state’s deadlocked budget process, and transportation fund deficit – and said legalizing marijuana could bring in millions in new state revenues. “We need to do something, and we continue to see new evidence to support the economic benefits of marijuana,” Sargent said. “So it’s even more unjustifiable, and it’s even more foolish to not legalize marijuana.”

Sargent’s previous bills to legalize pot have failed to get any Republican support, and the current attempt is likely to face a similar fate. “I’m hopeful that this year will finally be the year that my colleague’s get past that pesky ‘D’ at the backside of my name,” she said.

Assembly Speaker Robin Vos’ office said he does not support the bill.

The more than 100 page bill from Sargent and Representative Todd Ohnstad (D-Kenosha) would legalize marijuana for recreational and medicinal uses. A Marquette Law School poll from July of last year showed nearly 60 percent of those surveyed said marijuana should be legalized like alcohol.