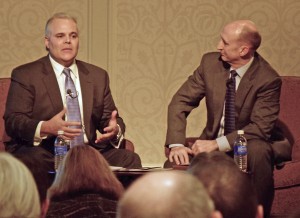 A former Republican state lawmaker has died after a long battle with cancer.

Former state Senator Ted Kanavas was 56. The Republican from Brookfield served in the Wisconsin Senate for 10 years, focusing on economic issues and serving as the primary sponsor of legislation giving tax credits to investors in startup companies.

After leaving the Legislature in 2010, he co-founded Michael Best Strategies, a government relations and public policy firm.

In a statement, former Governor Tommy Thompson said Kanavas’ passing comes too soon. “His endless passion and energy for recognizing, engaging, and solving public problems, both as an elected official and a private citizen, made him remarkable,” Thompson said.’

Republican Party of Wisconsin Chair Brad Courtney called the news heartbreaking. “Ted was a leader of the conservative movement in our state, spending years in the State Senate dedicated to the service of the people of Wisconsin. Ted was a great friend and we will miss him dearly.”