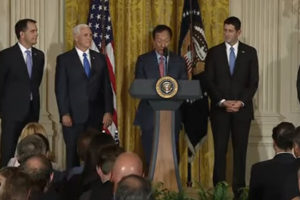 After weeks of speculation, officials from Foxconn joined President Donald Trump and Governor Scott Walker at the White House Wednesday afternoon to announce the Taiwanese electronics maker will be building a factory in southeastern Wisconsin.

The company plans to invest $10 billion to create a state-of-the-art manufacturing facility making liquid-crystal display (LCD) panels, a major component in many consumer electronics. The factory will initially employ about 3,000 people, although a senior White House official said that could grow to as many 13,000 jobs.

A specific location for the 20 million square foot campus, dubbed the “Wisconn Valley,” has not yet been determined. The Wisconsin Economic Development Corporation said the company is currently looking at several potential sites in southeast Wisconsin.

State lawmakers are being called on to pass an incentive package in a special session, which will be required to get the company to come to Wisconsin. According to a fact sheet from WEDC, that package is expected to include tax incentives that will be tied to job creation and capital investments, which are projected to cost the state between $200 million and $250 million a year. Overall, Foxconn will be eligible for maximum tax credits of $3 billion over a 15 year period.

Some Democrats are already voicing concerns about the deal. State Representative Jimmy Anderson (D-Fitchburg) questioned where the money to provide the incentives being offered to the company, and whether it would result in taxpayers helping to fund thousands of private sector jobs. “Wisconsin taxpayers should not be subsidizing private corporations at the expense of our children, schools, and roads,” he argued.

State Sen. Chris Larson (D-Milwaukee) also urged majority Republicans to proceed with caution. “Wisconsin leaders should not commit to corporate welfare or anything that carves out special exceptions in our laws if it will unfairly hurt local businesses already in our state. Every small-business owner knows: with a billion dollar pinky swear, the devil is always in the details,” he said in a statement.