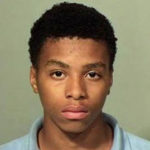 Greenfield police have identified the suspect in the brutal beating of a woman during an attempted carjacking as 18 year-old Corlean Thomas.

During the incident, which occurred on Friday, July 21, a 31-year-old woman was repeatedly punched in the face by a man with brass knuckles. The woman was in a parking lot at the time and said she was attacked while trying to get out of her car. She said a man yanked the door open and began punching her in the face. He also tried to pull her out of the car.

Police have already arrested a 16 year-old girl who they say was also involved in the attempted carjacking.